Three students of an Odisha school have been selected to visit Japan under a scheme that is aimed at promoting mutual understanding and friendly relations between India and Japan.

A distinctive CBSE school in the name & style Chandra Sekhar Academy conceived at the outskirts of Puri township on Puri-Konark Marine Drive Road at Balighai in the year 2004. Besides regular CBSE curricula, Japanese language and culture are taught as an elective subject from Nursery to 10th Standard.

“The Japan government will sponsor the eight-day trip of the students Ranjeeta Gochhayat, Rudrananda Pradhan, Sima Dash as well as a teacher Swapna Priyadarsinee Nayak,” said Srimanta Dash, chairman of the school that imparts Japanese language to students.

“Some students from Japan earlier visited our school. We have been putting all our efforts in the field of education to make our students prepare themselves for global exposure as well as for the modern challenges and competitions. I wish them all the best,” Dash said.

The school also take higher Japanese classes for Std. XI, XII & University students. This is the only CBSE school in Odisha which nurtures Japanese language & culture with utmost precision and neatness. The surrounding villages and hamlets those encircle the school like Baliguali, Beladala, Chaitana, Dalanai, Bhuan, Bangara etc. have got the rare privilege of sending their children to this school and thereby educate them with CBSE curricula along with Japanese language & culture.

Over more than a decade of its edu-service to the township as well as the rural community of coastal Odisha made the school stand majestic over four acres of land in a lush-green, eco-friendly environment to chant its hymn of success. The school is not only popular for catering education to the rural community of Odisha but also popular in far off Japan for its relentless service to make students learn Japanese language & culture and thereby bridge up the gap of communication between Japan & India. So, every year students of different Universities of Japan under internship come and join with the students of this school to exchange their language, culture, habitat etc. with them and also on a reciprocal gesture show their interest for Odisha language, culture and lifestyle. 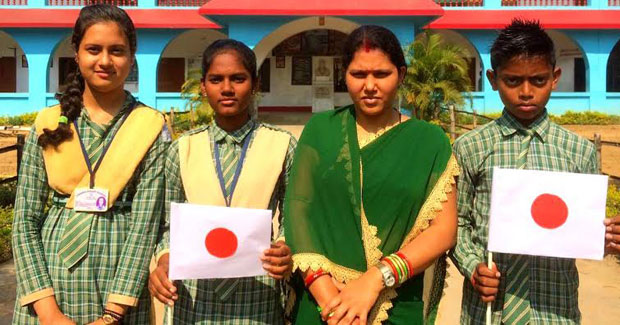