Amidst tension between India and Pakistan on the border, Hindu devotees from the neighbouring country visited the centuries old Jagannath temple in Puri of Odisha.

As many as 133 Pakistan nationals paid obeisance to deities in Jagannath Temple yesterday. Far off the country, the Pakistani pilgrims are on a long trip to visit several Hindu temples in India.

“This is my second visit to India and first to Jagannath Dham. We are overwhelmed at the spiritual atmosphere of Puri and hospitality of the people,” said a devotee of Lord Jagannath from Pakistan.

The pilgrims include 70 men, 50 women and 13 boys. The group reached the holy town by bus at 9:00 pm Friday. They spent the night at Nayak Plaza on Grand Road. Some of them visited the temple at night itself, it was learnt.

With their visit to different shrines in India, it is clear that the ongoing political and diplomatic issues between two neighbouring nations do not have any negative impact on religion and common people.

“We are all excited to have darshan of Lord Jagannath and his siblings here in the temple. There is no place for violence in religion and we feel lucky after offering prayer to deities,” said a Pakistani devotee.

Speaking about the objective of the move, chairman of Odisha International Centre (OIC) Paresh Nayak said OIC has been inviting the Hindus living in Pakistan to Puri every year. The aim is to spread Jagannath culture among believers. 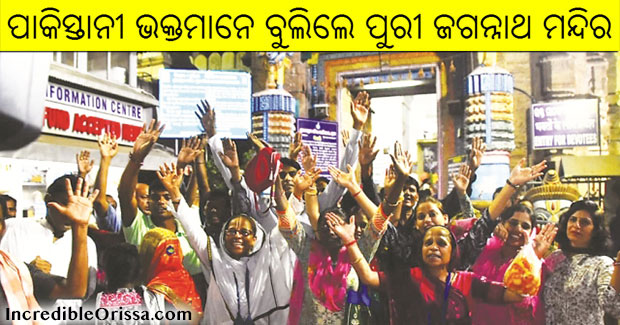