If you missed the Rath Yatra held at Puri on 20 June 2023 (Tuesday), then watch the full event video recorded from TV channels here.

A huge congregation of devotees, estimated at over half a million, thronged the temple town of Puri to witness Rath Yatra, the annual car festival of Lord Jagannath despite the drizzle and humid weather.

Lord Jagannath, the presiding deity along with his siblings- brother Balabhadra and sister Subhadra and celestial wheel Sudarshan came out from the Jagannath Temple on a nine-day divine sojourn to Gundicha temple, believed to be their birthplace.

The deities were brought swaying (pahandi) to the chariots from the sanctum sanctorum (Shree Mandir) by the temple priests and servitors amidst the playing of conchs and drums, blowing of trumpets, and loud chants of ‘Hari Bol’ and ‘Jai Jagannath’.

While Jagannath was ensconced in ‘Nandighosh’, elder brother Balabhadra was put to the 14-wheeled, 44-feet-high ‘Taladhwaja’ and Subhadra accommodated in her chariot known as ‘Devadalan’ with 12 wheels and standing 43 feet high.

Three towering chariots carrying the deities Lord Jagannath, Lord Balabhadra, and their Subahdra rolled on the Grand Road (Badadanda), the three-km stretch from the Singhadwar to the Gundicha Temple, after the Gajapati Maharaja of Puri Dibyasingha Deb swept the floors of each of the chariots with a golden broom. 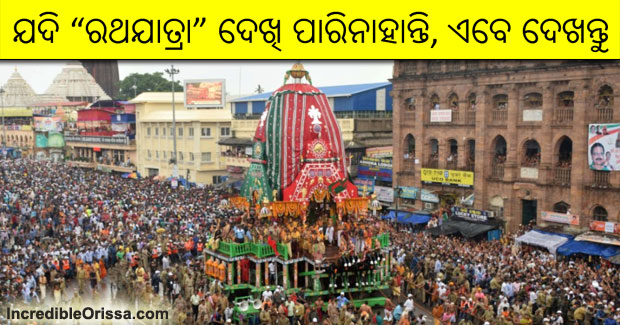