The 14th edition of Toshali National Crafts Mela 2019, organised by the Handloom, Textiles and Handicrafts Department of the Odisha government, begins at Janata Maidan, Bhubaneswar from December 15.

It witnessed the participation of several weavers, artisans, and sculptors from all over the country. About 50 weavers from different states of the country participated in the Toshali National Crafts Mela.

Speaking to ANI, Anjana Panda, Joint Secretary, Handlooms, Textile, and Handicrafts Department, Odisha, said: “People from all over the country, and especially the artisans of Odisha, have participated in the 14th edition of this mela. There are about 500 stalls here.”

She further stated that some cultural programmes were conducted in the mela, and additional facilities provided, such as wheelchairs and toilets for the specially challenged.

Speaking on the Toshali National Crafts Mela, Panda said: “We build the capacities of the people, we train them and create new designs. So they wait for these opportunities so that they can earn a year’s income from a single event.”

Manzoor Ahmed, a weaver, said: “I have been coming to this mela for more than three years. People mostly prefer shawls and suits in red and black colour. The response of the people has been very good.”

Another weaver, Reenita Mukherjee, lauded the initiative, stating that it is a good platform for the handloom industry of the country, which needs to be preserved.

“Every state of the country has a different cultural heritage which can be seen in their handlooms,” she said.

Eminent artists and troupes from different parts of the country as well as the state will be performing at the cultural programmes that will be hosted every evening between 6 pm and 9 pm. 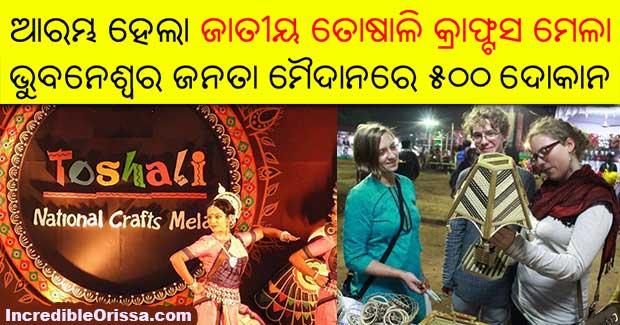